Navigate through the map by the clicking on the hotspots. 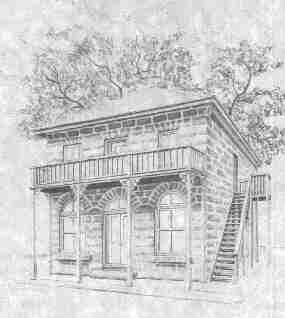 This attractive sandstone building, located on the Oregon Trail, was completed in 1872 for owners Amanda and Lewis B. Rinehart. They purchased the site from Jonathan Keeney who first settled the area and welcomed travelers to his small log dwelling located on the side of the Malheur River.

The Rinehart house was the first permanent building in the area and gave Vale its original name: Stone House. The Rinehart opened the Stone House on New Year's Day in 1873 with a Grand Ball. The upstairs ballroom soon became the desired location for weddings and various social functions.

Rinehart's Stone House became the nucleus around which the community of Vale, the Malheur County seat, developed. The Stone House was a wayside stop for weary travelers until the turn of the century. It was also a haven for settlers during the Bannock Paiute uprising of 1878.

Restoration of the Stone House began in 1988. The building and lot were bequeathed to Malheur County by the last private owner, with the understanding that it would be restored and used as a museum. The Malheur Historical Project was founded in 1987 for the purpose of restoring the Rinehart Stone House. The Stone House is conveniently located on S. Main Street in downtown Vale, Oregon near the junction of State Highways 20 and 26 just 16 miles from I-84. Listed in the National Register of Historic Places since 1972.

"A half mile north of Summerville was Rinehart Village. James Harvey Rinehart settled near this place in 1862, the year of the first settlement of the valley. He became the owner of the flour mill. Milling became immediately profitable, and wheat growing an important industry in the valley. The mines of Eastern Oregon and Idaho taxed the four mills of Grande Ronde to their fullest capacity, and Mr. Rinehart grew wealthy. The milling business is now in the hands of his two sons, W.E. (Willard Ellis) and H.C. (Harvey Clay) Rinehart. The elder Rinehart is still in the prime of life, and actively engaged in the care of 400 acres of wheat land, 1,000 acres of grass land, a band of some 200 horses, and immense numbers of hogs. Bacon is one of his specialties. He cures and ships from one to two hundred thousand lbs. per annum. It goes principally to Idaho. He estimated the export of bacon from Grande Ronde at 700,000 lbs. last fall and winter, at an average price of 15 cents per lbs.

The buildings around the mill are residences, store houses, smoke house, packing house, etc. Dr. W.E. Rinehart lives in the nearest house. I met him riding over the hills in all directions attending to his patients, who are numerous, as he is the only physician in that part of the valley."

From "A Tour of Union county," by D.H. Stearns (1882) in the Rare Book Room of LaGrande University, LaGrande, Oregon, in which he described his visit to the area in 1882.

A town called Winter was started about two mile northwest of the present Summerville. The town had a store, hotel and blacksmith shop. Upon completion of the road in 1865 a petition was circulated for a post office. However, Henry Rinehart circulated another petition for a post office nearer to the center of population. Rinehart secured the most signatures and was granted the office. Snow still lingered in the timber at Winter and it had melted away at Rinehart's location, so it was decided to call the new office Summerville and on May 30, 1865, a William Patten became the postmaster.

Henry Rinehart, built the first house and had opened a meat market on May 1, 1865. Within a year, there were a doctor and preacher in town, other business establishments sprang up, and a flour mill was built about a mile north of the post office.. The flour mill was soon sold to three Rinehart brothers, and J.H. Rinehart continued to operate the mill for years.

Just south of Summerville, Thomas Rinehart's homestead was adjacent to the Summerville Cemetery on the south side, He donated a portion of the cemetery land.

Jasper Rinehart's home was north and across the road from the Summerville Cemetery in the lowland where there are bushy trees and ditch now.

From Mr. Oliver of Summerville, Oregon.

No post office was ever at Rhinehart, but it was a railroad station with a flag stop for the O.R & N. in 1908. It was named for the Henry Rinehart family, but somehow the spelling was changed. A home of Henry Rinehart is still standing across the highway from the location of the Rhinehart Station between Imbler and Elgin, at the bottom of the grade going up to Elgin. The Station was a stop for freight and stage coaches.

Near Rhinehart Station was Lostine. John and Sarah Rinehart purchased land in August 21, 1884 and Mr. Rinehart planned the town of Lostin, October 31, 1884. He gave away the first two or three lots to parties that would build business buildings and homes. Fire destroyed nearly the whole business section in August 1893. In 1907 the railroad decided to bypass Lostine and ran its track north of the town.

1852 John and George Rinehart and families followed the Oregon Trail to The Dalles. From there they went either by the Columbia River, or The Barlow Trail around Mt. Hood, to Willamette Valley and spent the winter in Salem.
1853 Emily Jane Rinehart and husband, Peter Morton and their family, followed roughly the same route with Peter Morton's family.

"Cut Off" Southern Route of the Oregon Trail

1854 Lewis Rinehart and family, with his two son-in-laws, George Duncan, wife Louisa Rinehart and Thomas Edwards, wife Barbara Rinehart and families left the regular route at Vale, Oregon. They continued by way of Harney County across Central Oregon to Eugene. Lewis and Elizabeth's immediate family consisted of their seven youngest children at this time; James, Frank, Henry, Lewis B., William, Jasper and Sarah.

The Rineharts settled ten miles south of Eugene on Camas Swale in 1854. Lewis raised cattle and few sheep, also hay and enough grain to take to the mill for the family flour. There were no schoolhouses near their home, so what schooling the boys got before Sarah, the youngest, was old enough to go to school, was taught by a man in an old cabin near home. The pupils were all large boys, no girls. later on, Jim, Frank, Lew, and Henry went to college in Eugene. The college burned down the winter they were there.

In about 1859 Lewis moved to Eugene so the younger boys could attend the winter school. In the spring of 1870, Lewis rented out the old home and moved to the Grande Ronde Valley because the boys had gone there with cattle several springs before and were doing well. Jasper and some boys drove the sheep while Lewis and his wife drove a team across the mountains. They went to John Rinehart's place by the Wilamette route to Prineville, down the Deschutes River and over the John Day River up Rock Creek five miles above where Olex now stands. From that point on the Rinehart family centered their operations in eastern Oregon.

The donation land claims for George, John and Lewis Rinehart were located south of Eugene on the south and east slopes of Spencer Butte on Camas Swale Road.